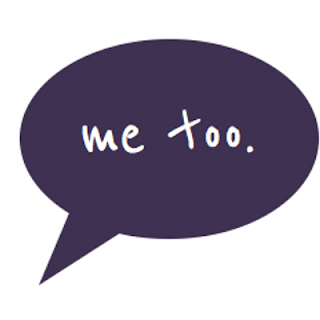 I was walking home with my husband a few weeks back, when he asked why I don’t walk across the bridge, why do I now walk the longer way home. I responded to him, with what I saw as an obvious response ‘well encase I get attacked or.... raped’ his response ‘oh I have never had to think of that’. His response was so natural and normal and I responded, ‘of course you don’t’.

It sat with me though, something festered about it and I realised, that’s his male privilege right there, imagine going 33 years through life without once having to think of the fear of possible rape or sexual assault.

Since being a young girl, it’s been part of my safety awareness, I remember walking to brownies with my cousin and being followed, since being a young girl I have had safety running through my brain every day. It comes every night I walk home in the dark, every time I do something alone, everytime a male walks too close on the street and I realised that festering I was feeling came down to that, right there, how easy it must be to be a male in this society.

So then it came to the #MeToo campaign, I saw it, I questioned it and suddenly I realised how could I not be part of it. I campaign in my own way, on my own issues, and I felt with this one, how could I go to work every day working with vulnerable young women and not stand in solidarity and share my experience as a woman. Isn’t that how change is made, by talking and sharing about problems such as this. It's choice though, isn’t it, it’s not how everyone choses to share but it’s also that people don’t recognise what sexual assault is, they don’t realise that a grope in a night club or flashing of a genitals is assault, isn’t that just what men do, isn’t that banter? I have heard this so many times, from friends, from myself, from the young people I work with, it’s so sad that’s the culture we come to believe  this behaviour is okay and as women we just have to accept it.

I have sat with many male and female friends and discussed what sexual violence is, how women end up in situations with no choice. I have discussed strip clubs till I am blue in the face, and tried to explain has that women chose to be there, and even if she has what is that choice about, do you feel a women wants to stand in a club with men trying to grab a feel.  I talk and talk and attempt to share as much as i can, as if it changes one person’s thoughts, lets them think in a different way, isn’t that enough.

I am not an expert, I work in this area, I have carried out a lot of training in this area but mostly I am a woman who has had her body used in a way that didn't feel good, who has felt it was the only way to feel love, who has been broken to the point of no self-worth, emotionally and at times physically. I made a choice to engage in the choices I did but I also felt if it wasn’t for my body and what it could give I wouldn’t get back what I thought I needed at that time.

As a young women and a women the body is a constant battle ground, we battle enough without the expectations males put on us. I hear many times in the counselling space how women have come to hate their bodies due to the violence placed on them through sexual assault. What I also hear is the blaming of self – I shouldn’t have worn make up, I shouldn’t have walked that way home, I should have known. We live in a society where women are blamed, women need to make themselves safer, but why – oh yeah just to make sure that males doesn’t sexually assault us. How about we change that and men stop thinking it’s banter and stop being ignorant but realise where not here to be groped, where not here for your amusement, where here as an equal and the minute you make it banter we stop being that and we become an object and in being that object your assaulting us in more ways than you can imagine.

So the #MeToo campaign, let it be ours, stop with the other # from men, how do you make a difference but letting us women share what we need too, see the impact and that it happens to so many of us. Let our voices roar and hopefully someone out there will listen and start to make that change. 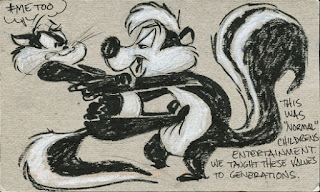 Posted by Claire Yvonne at 13:46 No comments:

My mother in law treated me to a Mollie Makes subscription for Christmas 2016, it's exciting every month a magazine coming through the day and an array of lovely creations to practice and make. I do find the magazine is loaded more with crochet creations then knit, and as knit is my primary choice i generally find myself ooling over pretty crochet pictures in awe of the designs.

As you all know i made myself a crochet blanket for the van a few months back, it used a basic Granny Square designed for the main body, so i felt after crocheting 143 squares i felt quietly confident in making them. So when i came across the crochet granny square cardigan by Anna Knits in issue 81 i knew i had to get my super pretty crochet hooks out and give it a go. I could see myself in it, bobbing around at a festival, keeping warm in the van, i knew it had to be mine and with that the project began. 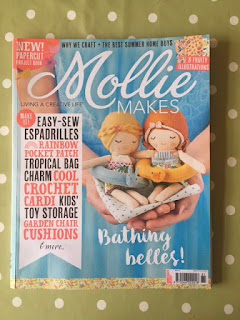 I wanted to use more autumnal colours then the ones in the pattern, i also chose to use different wool as using the wool in the pattern was going to cost around £60 and i was concerned i may mess up with it being my first big crochet clothing item so therefore wanted to buy nice wool but also affordable wool. I shopped around and settled on Big Value King Cole Super Chunky in Heather, Green and Cerise. When it arrived in the post i was so happy with the colours and knew there were what i would say 'my colours'. 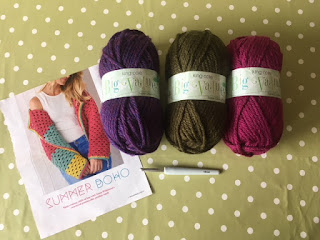 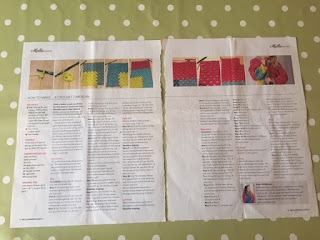 So i set to work and began to understand the pattern, as obviously it wasn't as easy as i first convinced myself. The caridgan is plain on one side and more patterned on the other, silly me, didn't realise this for sometime and kept pulling the pattern our as i couldn't make sense how both sides would match up. One afternoon i suddenly had  alight bulb moment and realised the difference in the pattern. After that i felt the crochet came together nicely and it was hooky all the way.

I used cerise as the main body of the colour, purple is my favourite but i know it's also my go to so i decided to go different and use purple (heather) for the least amount of colour. So i replaced the yellow for heather, the blue for green and used a similar but more autumnal pink for the main (cerise).

The pattern was really nice to work with and i felt for a first time crocheter i was able to decipher and make sense of pattern reading, i asked a friend for a few helpful hints however found i managed to work most of it out myself and unpick any crochet code i didn't understand with the help of google.

I think putting it all together was the most challenging, it crocheted up really thick and when i put it all together i found the arms were too tight so had to unpick and start again which was a real stress. I think the arms are my most disappointing bit of the crochet make as i made a few mistakes which i thought i could get past, however the result was super tight skinny arms. After a big of restitching though and quick thinking they worked out okay and it's only me and the keen crocheter that can probably tell. 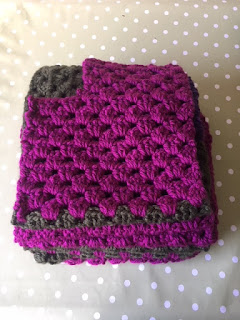 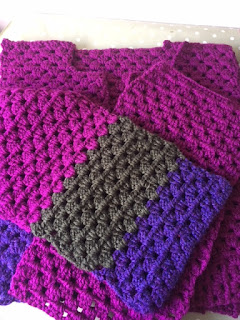 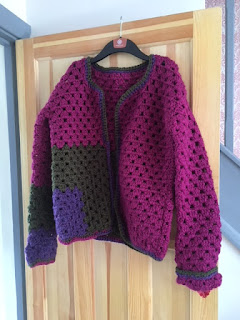 oh yeah and the sleeves are a bit long, however they actually look nice folded up. I really felt the cardigan came together when i did the edging, it's all different colours depending on what colour you were edging on too. I felt it defined the cardigan and completed it.

I took it on it's first outing when we stayed at our favourite pub in Malham, sadly we didn't get any photo's as we were enjoying being nestled by the fire with wine and games. However it did look good with a nice denim shirt underneath it. Can't wait to rock it more over winter.

Claire Yvonne
Newcastle upon Tyne, United Kingdom
I started this blog as a way to document my times and adventures as a northern lady, with it being an ever changing time I thought it would be nice to keep a journal of my ideas and adventures and share with those who chose to read. I am in my mid 30's and have lived in Newcastle for a few years after a stint in London then an adventure around the world. I live in the city with my bearded husband, retired greyhound Socks, pug Edith and four chickens, dreaming of country life but enjoying being based on the edge of the city. I love planning and have always got the next project or adventure in mind, this blog is my scribbles about living a creative, happy and positive life. I document my thoughts around my fertility journey and share honest views on remaining focused and positive. I am normally found either hand in hand with beard, knitting away, playing with my lomography cameras, walking the poochs, reading a good book, drinking a glass of red, exploring the outdoors, rolling around at a festival or attempting to learn something new.